Wernher von Braun as a prisoner in Moosburg

Stalag VII A Moosburg and other POW camps

Wernher von Braun as a prisoner in Moosburg

His biographies don't mention it, but the famous rocket scientist Wernher von Braun spent some weeks in the Civilian Internment Camp at Moosburg after having surrendered to the US Army on 2 May 1945. 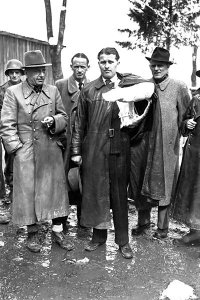 During the war he had developed the notorious V-2 rocket which cost the lives of 8,000 civilians in London and Antwerp and of 12,000 slave labourers who produced the weapon in the Mittelbau-Dora concentration camp. Nevertheless, the V-2 and Von Braun's knowledge were the basis of American military and civilian rocket technology.

From the Moosburg camp von Braun was soon transferred to Landshut and finally sent to the USA where he worked for the US Army and later for NASA. He was involved in the Mercury, Gemini and Apollo space programmes which led to the first manned moon landing in 1969.

In April 1958, newspaper articles published in the Mainburger Zeitung told von Braun's story in Moosburg. His fellow inmates considered him as a traitor because he willingly disclosed his secrets to the Americans and was awarded with immediate freedom.